Perhaps this is a sequel to my bad experience with #TNSTC recently. A friend shared on Facebook about their experience where the conductor vehemently refused to accept eTicket and its identity card despite the passenger being a female senior citizen and harassing them to purchase another fresh ticket for the journey.  I have been seeing a similar stand a few years ago if I remember in Kumbakonam bus stand. The timekeeper was adamant to see a print of the ticket and I had to search through the market area for a shop that can print the same. The reasons they cite for the same are flimsy.

Every other private transport corporation have started embracing paperless ticketing as an environment friendly initiative. All those quoted reasons are just flimsy because there is something called Reservation Chart which carries the name of the passenger and along with that a valid state identification can do magic.

Here is the quote from the user regarding their experiences:

On November 22 2019 I had a booking from Bengaluru to Chennai on SETC. Incidentally the booking confirmation alert did not come through. This is now anew and I had escalated it many  times to them, BusIndia team and RadiantInfo too but thanks to them recruiting sophomores as a cost-cutting gestures nothing seems to be getting fixed  on time though they claim their trips as “On Time Every Time”. And this time the email alert failed to trigger. The printout of the browser could not be obtained too as browser crashed with a 500 error from the website when trying to open the PDF. Murphy’s law did not end its scope there.  The booking confirmation was not appearing too.  Perhaps that is because incidentally I ended up having another account without my knowledge which I later discovered.

So only confirmation I had was a confirmed bank debit. The call center was not only unable to access the reports of Reservation Chart but wanted me to make a fresh booking discarding the current one. They had the temerity to disconnect the phone and refuse answering subsequent dials. The reservation counter clerk was no good either. He also was telling he does not have access to Reservation Charts.

Fortunately the chief time keeper understood the issue and asked me to wait till the chart prepared and then since the name was appearing he verified against my identification card and advised the conductor to allow me as as an exceptional case.

Having seen commuting between Bengaluru and Chennai quite frequently on SETC, KSRTC and Trains I would like to share a comparison between the different modes of communication between the cities.

The Tula month was almost over by November 16th. So I  had  booked a KSRTC bus on 15th to travel to Talacauvery. The nearest transit center for Talacauvery is Madikeri and from there we need to catch a bus to Bhagamandala. Interestingly I got the direct bus (which plies one per day) from Bengaluru to Bhagamandala. The bus reached Bhagamandala at around 7.30 AM. After a quick holy dip in the Triveni (Cauvery, Kannike and mythical Sujyothi) we proceeded to the Siva temple. Just one week ago I had taken the Ayyappa mala so at this temple put the #Tunai mala too.

After a light breakfast proceeded to Talacauvery and returned back by 10.30 AM. It then took an hour and a half to return to Madikeri. From Madikeri made a plan to visit Mysuru en route to have a darshan of Karyasiddhi Hanuman temple in Sri Ganapathi Satchidanandha Swamy Mutt. After that took the late evening bus to return to Bengaluru.

I had an opportunity to travel from Velachery to Guindy a few minutes ago. The bus got stranded even before it reached Chakrapani Road intersection. Somehow when it managed to reach Race Course tried booking a couple of Uber to Guindy. The drivers reported their inability to come because of long traffic held by Chennai Traffic Police as a measure to fortify the city for Chinese delegates arrival. Another Uber driver managed to come but had to abandon the trip en route just before Anna Salai intersection. The traffic police were even holding back pedestrians from accessing Anna Salai in a real curfew like situation. One traffic cop almost passed out and his colleague was telling they had been on duty since 5 AM without proper breakfast and/or snacks. All tea shops have been closed too.

After a couple of convoys crossed we were able to walk till Kathipara to catch the next set of vehicles from the other intersection.

Today had a customer meeting in Guindy and started from Perungudi. The traffic was unusually slow near Tidal Park junction itself. Somehow managed to reach Jayanthi and from there when we took the  bus it came to a standstill near Madhya Kailash. Then we realized that the early morning mishap of Road Cave In was to be blamed for the same. Unfortunately it had been more than 8 hours now. Neither the civic body nor traffic police were able to provide a recovery of smooth traffic in this stretch.

Due to these mismanagement my customer meeting got disrupted and had to reschedule it much to their dissatisfaction.

It has been 15 days since April 1 when I started the Ayyappa Vratham and on 11th April I had the trip to Chengannur. At least till the daybreak of 11th the trip was in WL mode and did not get confirm despite giving an Emergency Quota request too. It could just ascend up to RAC. Somehow managed the show and reached Chengannur at around 7 AM.  Then took the Pampa bus from there to reach Nilakkal by 9 AM. En route the bus stopped for a breakfast in a small restaurant. From Nilakkal we took another bus to reach Pampa by 10 AM. After a brief dip in the very tiny stream of the river started trekking the up hill by 11 AM. We reached the Sannidhanam by 2 PM and the temple was scheduled to open only by 4 AM.

The #Sukku coffee which is sold by hawker was simply delicious along with medicated herbal water distributed free by Travancore Devaswom Board. These are mandatory to ensure a healthy trek up and down the sacred hill.  We had a good darshan after the temple opened without much crowd. We then had the annadhanam (dinner) at the Travancore Devaswom Board Annadhanam center itself. That was another delicious divine offering and was sumptuous. That night we chose to halt in Nambiar Mandapam and then start downhill trek early morning of 13th. Once we reached Pampa around 7 AM we were trying to get a direct bus to either Nagercoil or Kumily and we were out of luck.  We then figured out that we ought to reach Pathinamthitta and only from there we could get a bus. In between another interesting experience. One bus driver told us that we can board any bus and get dropped in KSRTC station a few feet away and no ticket for the same the conductor was refusing and was asking for a full charge of Nilakkal even to get dropped in KSRTC bus station in Pampa. So when we started walking to KSRTC bus station the other bus driver who was guiding us was coming and he stopped his vehicle and offered us the lift.

Once we reached KSRTC bus station we took the bus to Pathinamthitta. In Pathinamthitta bus stand we realized that bus to Nagercoil or Kumily just left and for Chennai there used to a direct bus till a few months ago but mysteriously ceased to come without any intimation to even the timekeepers. So we took a bus to Thiruvananthapuram. The biggest headache in this bus stand was everything was written in Malayalam. One KSRTC driver helped us locate the Thiruvananthapuram bus and helped us board it.

After a few hours journey by afternoon the bus reached Thiruvananthapuram. After having some quick lunch started to Chennai. On a casual chat with conductor he was telling the bus is going through Aralvaimozhi. We requested him to see if he can go slow when it is near Isakki temple and he added that he will even stop for us couple of minutes to have a darshan and come. And he did too. So one more darshan in Isakki temple we got.

The bus reached Chennai on 14th morning at around 7 AM.

Today also marks the completion of 6 Week Mangadu Lemon Pooja. When I visited the temple at 9 AM I reminded a friend who agreed to help by procuring boiled milk with added sugar locally instead of having it to ferry all along the city perimeters. Interestingly since he got locked with another commitment to travel to 45 kms still North of Chennai, he was waiting at the temple to quickly give the bottle of milk and then  left.

Though it is a new plastic bottle the priest had a concern because showing the prasadam on a plastic bottle is not considered apt but it looked like Kamakshi convinced to accept it and offer the same to Her.

When they offered the milk to Her it resembled to me as if giving the milk to a tiny baby. In fact she always appears to me like a small kid.

Thanks to Her blessings for a gentle completion of 6 week pooja.

After a long hiatus of 9 years 6 months and 27 days the prayer commitment of a Veshti to Velachery Pillayar was completed today. It was prayed for a different reason that time on 28th July 2009. While Pillayar kept His word and fulfilled the aspiration the return promise got delayed this much time because of various other preempting commitments, travel reasons, logistics etc.

Thanks to Pillayar itself and Todolist was diligently following it up and taking the same to closure.

When I visited the Pillayar Temple it was quite close to 5.45 AM and I was the one to give a #Wakeup call to Him and the priest at their cellphone. The temple opened at 0645 and after they completed the morning rituals they put the veshti over the Pillayar. 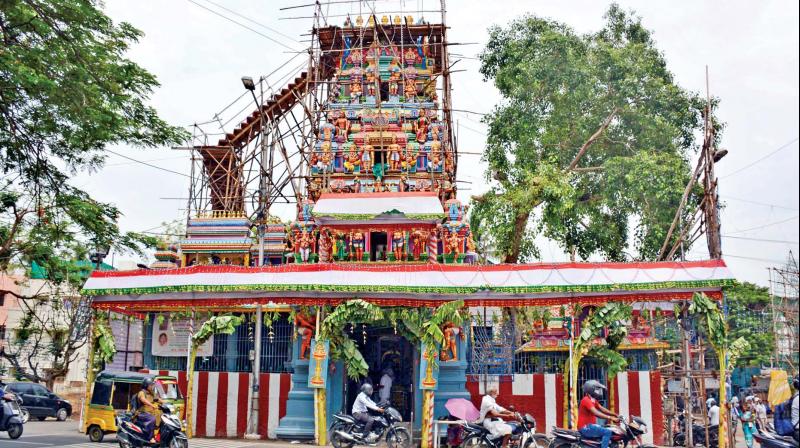 Today it happens to be the third week of Aaru Vara Vazhipadu in Mangadu. So first visited Mangadu by 0830 AM. During the journey witnessed some hostile incident between drunkards and MTC crew in Tambaram West bus stand which was unnecessarily delaying the services by a few minutes.

Once Mangadu darshan complete tried to visit Moondram Kattalai Sri Santha Mookambika Temple. This temple visit comes after several years. Found one interesting feature in this temple. The sanctum sanctorum is attended by women folk unlike other temples. Oh Yes. Melmaruvathur is an exemption again where women folk attend the duties in sanctum sanctorum.

Next scheduled visit was to Siruvapuri Balamurugan Temple which involves a lengthy journey. First bus to Poonamalee and then another to Red Hills but alighted at Avadi itself on sighting a bus to Arni (to avoid city entry). From Arni took a share auto to reach Siruvapuri. Unfortunately the temple just got closed when I entered so had to wait for an hour and a half and had darshan at 1615 hours.

The return trip was crowded bus to Vallalar nagar and hence alighted at Karanodai to catch another bus to Red Hills. Then to CMBT for onward travel back.